Permalink Reply by Sadie on February 8, 2015 at 1:21am
Beatlebob, I made this with you in mind, because we've been having a long conversation (5 pages worth!) on a picture's comment section instead. Hopefully Miss Retro won't mind! LOL!

Permalink Reply by Sadie on February 8, 2015 at 1:44am
You asked, what are my favorite Rick Nelson songs? For about a year
(From December 2013 to December 2014)
I've became such a huge fan of his.
That includes listening to his entire catalog! It's difficult for me to choose favorite songs, as I enjoy all of his music! But I guess I could try to name a few. I'm especially fond of these particular tunes (in no significant order)
"It's Up To You"
"Easy To Be Free"
"Let It Bring You Along"
"Love Is Where You Find It"
"Oh Yeah, I'm In Love"
That's barely even scratching the surface for me, but it's best to leave that list at only 5 songs, to prevent going overboard. LOL!

As for albums, I enjoyed all of his efforts, but my favorite is his 1964 one called "The Very Thought Of You". It came out during the height of Beatlemania.
Besides his own material,
I also liked his versions of other people's songs, such as Bob Dylan, etc...
Several of his covers I like even more than the originals! But maybe I'm just bias, because I love him so much. LOL!
I liked him as an actor too, in television and movies. But of course, more as a musician. I think he's somewhat underrated! But in a way, that's also a good thing. I feel like I get to keep him all for myself, unlike Elvis Presley fans who have to share the enormous fanbase! ;-)

Yes, I certainly know you've become such a big fan of Ricky!! That's why I asked about your Favorite songs. I was curious. Thanks for letting me know!! :-) WOW!! That includes listening to his entire catalog!!! I can imagine it's difficult for you to choose your favorite songs since you enjoy all of his music!! Cool!! Thanks for letting me know the ones you're especially fond of!! :-) And that's barely even scratching the surface for you!! LOL! ;-) Yeah, it's best to leave that list at only 5 songs, to prevent going overboard. LOL!!!!! :-)

I see you enjoyed all of his Albums but your Favorite is his 1964 one called "The Very Thought Of You". Yes, being 1964 it did come out during the height of Beatlemania!! Sounds like a Cool Album!! I see you like Several of his cover songs even more than his originals! Yes, could be that you're just bias, because you love him so much!!! LOL!!  ;-) When I get some time I'll have to check out those songs you listed and "The Very Thought Of You" Album! :-)

Yes, I know you like him as an actor as well!! In both television and movies. But, you like him even more as a Musician! I also, think he's somewhat underrated as a musician! Which is sad! But, that's a Good Thing for You I see!!! LOL!! :-) Yes, unlike Elvis Presley fans who have to share the Enormous fanbase!!! ;-) Thanks for letting me know your thoughts on this!! And when I get a chance I'll listen to those songs you listed!! :-)

Permalink Reply by Sadie on February 8, 2015 at 6:20pm
I was wondering why you asked me that.
I thought maybe Mike Pell wanted to know? LOL! I guessed maybe he was a fan too, since he mentioned Buddy Holly & The Crickets. Yes, if you've never heard any of the music I mentioned, give it a try! It took me about a year to get familiar with ALL of Rick Nelson's music, beyond his greatest hits. I listened to every album! Now I know all his songs very well. He became my favorite solo artist. It's funny how I actually discovered him by searching for classic sitcoms and finding Ozzie & Harriet! Not by his music! I got into that afterwards, because he performed on the show often.
The only thing Elvis did that I wish Ricky did too was make more movies! But at least there's 435 episodes of his TV show! That'll keep me busy for a long while! LOL!!! ;-)

I asked you that because I wanted to use the songs in one of the Valentine's Day Pics I made for you! LOL! ;-) Plus, I also plan on checking those songs out on Youtube when I get a chance! I don't know if Mike Pell is a fan of Ricky or not? Yes, when I get a chance I'll listen to those songs you mentioned!! I see it took about a year to listen to Every Album. Now you know ALL of his songs very well!! COOL! Then he became your Favorite solo artist! :-) That IS Funny how you discovered him by searching for classic sitcoms and finding Ozzie & Harriet!! I Know you enjoy that show! So, you got into his music afterwards, because he performed on the show often. I enjoyed when he performed on Ozzie & Harriet too!! :-) He sounded very good!!

Sadie: Hope you got the links etc I sent you to your Yahoo address yesterday!  :-)

And thanks for letting me know what CD that was on your Profile Pic!! :-) 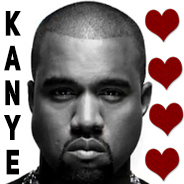 Sadie, I just now found Maybe I'm Amazed on SNL. I tried to embed it on BAR. But, it won't work! But the Link to it Works! Enjoy!

Here is the Link:

Permalink Reply by Sadie on February 18, 2015 at 3:31pm
LOL! That Kanye profile picture would be a great April Fool's Day joke! Thanks for the link! I haven't even checked my Yahoo e-mail yet, so I wasn't aware you sent me a link. Thanks for posting it here too. LOL! Hopefully it will work! :-)

Permalink Reply by Sadie on February 18, 2015 at 10:49pm
The video isn't working for me! Grrr! Oh well. I'll try to update my browser later and see if that helps. I got your e-mails, Beatlebob! I appreciate you forwarding Mike Pell's messages on Buddy Holly to me. Really enjoyed reading them. And that joke about Kanye as Ronald McDonald made me actually laugh out loud when I was having one of my sad days. Which is almost everyday! :-( Especially now that I'm uncertain of BeatleGirl's friendship with us.
Thanks for the giggle! :-D

LOL!! Yeah that Kanye Profile Picture Would be a Great April Fools Joke!! LOL!! ;-) You're Welcome for the Link!!

When you click on the Link it takes a little while for the video to load. When it loads then click on the play arrow. Then 14 seconds or so of commercials. Then the Video Plays. I just tried it again and it worked for me. Give it a try again. You just have to be patient with it before it starts loading! Glad you got my emails!! I'm Glad you enjoyed reading Mike Pell's messages on Buddy Holly!! I'm So Glad that joke about Kanye as Ronald McDonald Cheered you Up!!! :-) Especially since you were having one of your sad days! :-( Yes, I know it's So Sad that we are uncertain of BeatleGirl's friendship with us!! :-( Especially For You, since you were Very Close Friends!! :-( I Miss Her Too!! And still wonder why she doesn't show up!? :-( You're So Welcome for the Giggle!! :-)

I just got the Link in the mail to Mike Pell's Podcast. I'll send it to you in your Yahoo mail! :-)

I Really Liked the Ricky Nelson Songs you mentioned!! I thought they were Great!!! :-)

Permalink Reply by Sadie on February 19, 2015 at 3:45pm
Thanks for posting all those videos!
I liked some of the Rick pics in the slideshow ones. And the lyrics in the Let It Bring You Along one! Have you ever watched the early episodes of the show when he and his brother were little boys? Little Ricky was so funny and mischievous as a kid! LOL! I like the later episodes better though because he performed at the end of almost every show. I love Ozzie & Harriet. I could watch it all day! Mainly just to see Ricky!

I noticed Ann is on Facebook right now! There's a green dot and she even commented on some page.
I wonder why she's still not talking to us though? Maybe she ditched us and The Beatles for The Cars? :-(