The Effects of Marijuana

Guys, this isn't funny so I thought I'd share them here. 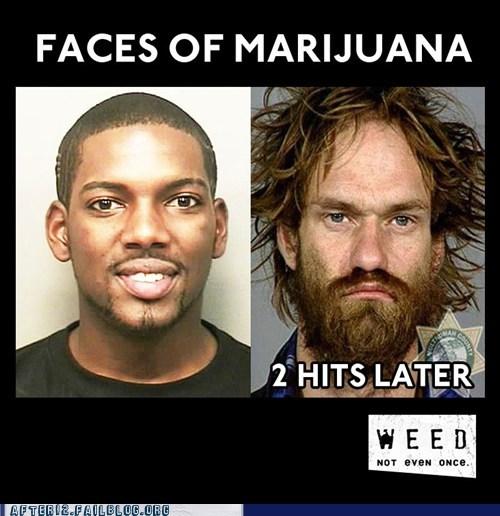 YIKES!! These Pics are Scary!

Good for You, Sadie!

I smoked pot for the first time when I was 16. Then smoked it on and off through the later part of the 60's through around 1976 or so. I never smoked it by myself. Only with my friends and once in a while with my older cousin. Mainly smoked it with my friends when they rented a house during the years they had their r&r band. We only smoked it when one of us had enough money to buy enough for all of us to smoke, and we bought it from friends we knew who sold it and used it for themselves too. We didn't want to buy it from strangers because we didn't want to chance getting some that were laced with something! We smoked it together in the comforts of their house. Was on and off. It made us laugh a lot then mellowed us out. It never had any ill effects on us.

We smoked it at a few partys we went to, but we went together and the people there were extended friends. So, it was enjoyable. A couple of times we smoked some when going to a concert.  But, smoking it ruined the concert for us because we were too wasted to enjoy the concert and it also made us feel paranoid a bit while there. So many people smoked it in those days. When I did it I enjoyed it. But, we lost interest in smoking it when the band rented rooms by themselves when they couldn't afford renting that house anymore. We just drank beers most of the time when being together and after they left that house they rented. It was just the thing to do in those days, when we could afford it. I'm Glad it never gave me any ill effects!!

But, I wouldn't do it these days! And I wouldn't advice anyone else to try it! It can effect people in different ways, it can lead to stronger drugs, and when buying it who knows if it's laced with anything?

Did you ever try it Candy O??

Yep, it made me paranoid and was a depressant for me actually. Maybe because I was naturally depressed at that moment? I lost my sense of direction, but I would try it again! :) When it is legal, of course! Haha maybe I should move to Europe.

Well, it does effect people in different ways. Sorry to hear it made you paranoid and was a depressant for you!! :-(( Yes, it could be because you were naturally depressed at that moment? And you lost your sense of direction! Scary! :-(

re: "Haha maybe I should move to Europe."